Linda Funnell is co-editor of the Newtown Review of Books, a free online book review founded with Jean Bedford in March 2012. For ten years she was a publisher with HarperCollins, and prior to that Random House. Currently she is a freelance editor and publishing consultant. The authors she has worked with include Colleen McCullough, Geraldine Brooks, Diane Armstrong, Louis Nowra and Steven Carroll. Linda has been a peer assessor for the Literature Board, a mentor for the Residential Editorial Program and has taught courses in publishing, editing and writing for UTS, the ASA and the Writing NSW.
Paula Morris (Ngāti Wai, Ngāti Whatua) is the author of the story collection Forbidden Cities (2008); the long-form essay On Coming Home (2015); and eight novels, including Rangatira (2011), winner of best work of fiction at both the 2012 New Zealand Post Book Awards and Ngā Kupu Ora Maori Book Awards. Her most recent book is False River (2017), a collection of stories and essays around the subject of secret histories. She teaches creative writing at the University of Auckland, sits on the Māori Literature Trust, Mātātuhi Foundation, and New Zealand Book Awards Trust, and is the founder of the Academy of New Zealand Literature. Appointed an MZNM in the 2019 New Year Honours, she currently holds the Katherine Mansfield Menton Fellowship.
Kirsty Murray is a multi-award-winning author of books for children and young adults. Her eleven novels are studied in schools and universities around the world. Kirsty has been a Creative Fellow of the State Library of Victoria and an Asialink Literature Resident in India. Her acclaimed series of historical fiction Children of the Wind follows the lives of four Irish-Australian children whose lives intersect across 150 years. In 2011, her YA novel India Dark won the NSW Premier’s History Award for Young People’s History.
Colin Falconer is the author of over two dozen novels of historical fiction and has been translated into 23 languages. His novel Harem, based on the life of the Ottoman sultan Suleiman the Magnificent, sold over a quarter a million copies Germany alone and Aztec, about the Spanish conquistadore, Hernan Cortes, was on the bestseller lists in Mexico for four months. His latest novel, Loving Liberty Levine, about Russian immigrants coming to New York just before World War 1, is published by Lake Union. 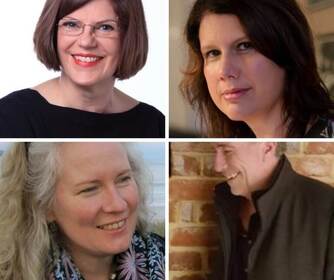