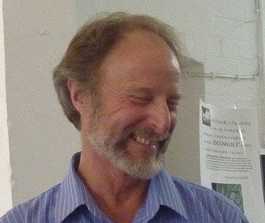 I am very newly hatched as a poet, and hope that perhaps
I may be able to learn to soar one day.
As one of the greatest poets wrote:
'I am a part of all that I have met; Yet all experience is an arch wherethro' Gleams that untravell'd world whose margin fades
For ever and forever when I move. How dull it is to pause, to make an end, To rust unburnish'd, not to shine in use! As tho' to breathe were life!'

At a pub, farewell for work mate,
come on they said, come on,
Raj, even you need some fun, meet the office girls.
Office girl Cheryl, undressed to kill,
loves Indian boys, those dark to die for eyes.
Grafted to her phone, she flirts and smiles,
spikes his fruit juice with vodka,
takes call after call until his head is ringing.

Let's go he says, let's go.
Past the bouncer guarding his star gate,
lizard eyes dreaming of human conquest;
body monoslabic: a wetsuit full of hard solutions
to your problems of location.
Mouth monosyllabic: You, OK: In. You, OK: Out.

They leave
the pub's clean air con into the smoker's funk.
Wind from the ocean: wet sand and unbreathed air. Full moon: he says, beautiful so beautiful. Alert for any compliment, she simpers.
She has a bottle and only one idea: I know a nice place in the dunes.
This way, she says, this way, but he follows the line of the staggering waves.

Her phone poisons the air with its shrieks:
he strikes it from her hand into the sea.
Vodka spins roulette wheels in his head and he falls, face down in the fizzing waves.
Choked with rage she drops on her knees hard into the small of his back.
Dark matter fills the spaces between breath and heartbeat, eats up the light and hunts for more.
He sees Goddess Kali snarling, black as a panther below him in the waves,
filling his mouth and lungs with her salty wet breath, biting his lips in a farewell kiss.

Stumbling up, she has only one idea.
Her eyes are fixed on the universe of bright little screens teasing and gleaming on the water.
The moon burns a path into the sea, black, silver, and fool's gold.
She runs, grabs, falls hard onto a black rock with a cat's face.
The waves cover her head, ring tones singing, sing tones ringing.
Below her she sees his dark to die for eyes: she smiles.