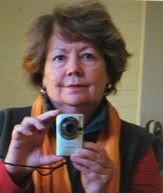 Jane O’Sullivan lives in Armidale NSW, where she spends much of her time painting and writing, between meeting friends for dog walking in the Pine Forest, and conversation in the many coffee shops in town. She is an Adjunct Senior Lecturer in the School of Humanities, Arts and Social Sciences at the University of New England. In 2017 she had a collection of thirteen poems, Mondo Cane — Street Dogs of Italy published by Ginninderra Press.
It was a criminal break-and-enter
of the heart.
New locks fitted
since the last time he left
her heart exposed
to the wintery months ahead
he stood at her door
fogging up the glass
with the heat of him
— her form a shadowy hesitation
within.

She’d advertised a garage sale
— ‘Not before eight’
he’d come for his stuff
well, he’d just have to wait.
Layering on her clothes
she heard him all the while stamping
and huffing into his hands
— it was bitter cold.

Picking through the stock
he passed over his own
only shelling out for the shot gun
she’d forgotten was there
¾he was set on having it.
Though it was old and faulty
there was no saying no to the sign
bellowing ‘Everything must go!’

She charged like a wounded bull,
threw in the cartridge box
¾no charge but at a cost.

While pickers had formed a steady flow
and the stock good and bad all sold
that gun still weighed on her mind
¾a woman alone
she’d really meant to keep it
but he’d never grasped the concept
of no means no.

and surrendered to a sleep broken
by the sound of him.

Huffing and stamping in the bruise of night
both barrels loaded and out of sight
he kicked at her door.
He’d come for his money back
— and more.