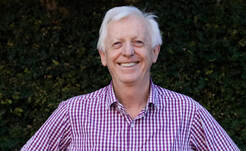 Roger Vickery attended a one teacher country primary school until he was 10. On his first day in a ‘real’ school he suffered a significant assault and battery and began spending recess and lunch in the library. His interest in crime and justice may date from that incident. Type cast in his teens as a weedy academic he compensated by spending much of his 20’s taking risks and mixing in dangerous company…such as ‘Tony D’, Western Australia’s most wanted prison escapee, who was running a jazz bar in Bangkok, ‘Weird Harold’, skipper of the most unsafe Trimiran in the South Pacific and Theresa, a Californian co-ed he barely knew who told a squad of circling drunken Spanish soldiers in a back room in Malaga he was her novio and mucho duro.
Roger’s varied occupations include soldier, sailor, marketer, barrister, textbook writer, researcher & TAFE teacher.
His poetry and short fiction have been published in Australia and overseas. He has been fortunate to win many writing awards, including the Bruce Dawe and WB Yeats poetry prizes and the Sandra Harvey Crime Short Story Prize. He is the co-author of two plays A Nest of Skunks and Mum, Me and the IED. Both enjoyed successful runs in Sydney in 2016 and 2018, respectively. .
Madden’s Palace was inspired by numerous visits to the Downing Centre Courts. Like most of Roger’s output it took countless drafts over several years before he was satisfied it was half way decent. He often attends self- help meetings where he stands in a dingy hall and shamefully admits to his fellow addicts ‘My name is Roger and I’m a chronic re-writer’.

Judge’s comment:
Madden’s Place, presents an absorbing narrative set at Downing Centre District Court in Sydney and demonstrating deft usage of characterisation, dialogue, rhythm, structure, form and narration. This is the kind of poem with layers upon layers—to which readers can return and continually discover new meanings, messages and nuances. The poem moves quickly and pauses sporadically—like a city bus—gripping the reader’s attention with its regular six-line stanzas. Within the rigid framework of the stanzas, one encounters linguistic playfulness, density and experimentation.

Now we offer Pleas, Hearings, Wigs & Gowns, Madden tells new recruits.
In summer he single files the newbies across the road like a Daddy Duck
and points at sunrays skating across the Downing’s golden tiers.
Mister Mark Foy had aspirations to Australian Medici hood he booms.
Those tiers are glazed with yellow cake...baked uranium powder.
One Al Qaeda bang and it’s sayonara Sydney...hello Chernobyl town!

See three coppers with empty holsters, crossing and uncrossing
their arms outside the Senior Sheriff’s office, fretting for their glocks.
When Madden clocks their passive-aggressive semaphore you know
he’ll make an about turn and stride away, gun cabinet keys jingling
leaving the cops to glare and tap their feet and make a manly pout.
They know the court and its sheriffs are masters here.

And why is that? Madden asks nervy recruits in theory class.
Magna bloody Carta! Independent justice...warts and all.
The coppers toil for the government. Their job is catch and convict.
But you and me we’re agents of the judiciary where every offence
is weighed and measured and justice must be seen to be done.
We serve in the Palace of Reasonable Doubt.

Stomp to the cells and gentle a female crew of Not Guilty pleaders
who shout for briefs, hairbrushes, a bit of blush...It’s mostly show.
All NGs are born again believers in the jury’s lucky dip.
They know my cuffs are ready. Only novices and the non-medicated
will risk the wrath of the power ball gods by appearing in the dock
with bracelets that brand them as ‘mad, bad and best to convict.’

Nod when Josie, 40-something, your age, one of the stolen gen,
facing armed robbery of the North Newtown Golden Dragon,
tells you a gypsy in remand read the Tarots and passed the word
‘one of twelve’ will come to her aid. I only need one, eh?
Josie sucks on her inhaler. One juror to reckon there’s doubt
and the judge will say no deal, you walk today. True fact, eh?

You could put Josie right. Tell her the rules have changed...you need
two for a hung jury now. Her legal aid brief is green and odds are
that sparker-eyed 10 year old girl of hers, same age as yours,
who’s been blowing kisses in court will go home with DOCS.
Instead you escort her to court and watch the Golden Dragon’s
owner break a saucer and swear his ancestral soul will shatter

if he doesn’t tell the truth…the traditional Taoist oath.
Mister Huang’s glasses are thick as birds’ nest soup
as he stabs a finger at Josie: That dark woman hold knife
here...my throat. You wait for Josie’s brief to rise and run
a robust cross on Huang’s field of vision and why the waiter
remembered a different weapon. You wait in vain.

Most days you’re okay with your work in Madden’s palace.
You trudge home feeling the scales tilted more right than wrong.
But today, in Upper Court 2D, hearing Josie’s asthmatic sobs,
seeing her kid cry and claw for Mum as you dig your thumb
and middle finger into her elbow and turn her towards the door,
you can taste the yellow powder in their throats.