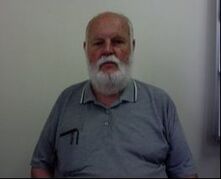 Born, educated, moved around Brisbane.
First (gainful) employment at Lismore, NSW, working with cattle ticks.
Moved to Armidale, NSW. Became a geneticist. Became interested in the inheritance of ability — about a week after discovering the (unacknowledged) prizes my mother had won for her writing.
Discovered 'I' enjoyed writing — short stories, especially with a large touch of the ridiculous. Easy enough — genetics is full of them.

One Solitary Grain of Sand

This document was forwarded to me by the College Head of Domestic Services. I am writing on behalf of the St John’s College Council.
Your request to be provided each Monday with a “cut” (I presume you mean packed) lunch “to include at least one cheese and tomato sandwich and a piece of fruit, preferably an apple” has been refused. It was felt that providing any sort of packed lunch on a regular basis would lead to other students making similar requests : the College could not sustain such a drain on its resources.
I have to advise that you have right of appeal against this decision. Should you feel you have grounds, please direct the appeal to the Chairperson of the Heads of Colleges Committee at the University.

I refer to your appeal of recent date against a decision made by the Council of St John’s College not to supply you with a “cut” (I presume you mean packed) lunch of a Monday.

The Heads of Colleges Committee, after considering the matter, has decided to uphold the decision of the College Master. It seemed to the Committee that your request would involve an unwarranted, profligate use of domestic staff time. This is at a period when strictures have to be applied rigorously in this area.

I have to advise that you have right of appeal against this decision (Section 19, Ssctn 14.79 of University Regulations, see University Calendar, page 539).

Should you decide to avail yourself of this right, your appeal will be heard by the University Ombudsman, to whom your correspondence should be directed.

--the bottles of arrack

(Arrack to be distributed amongst the Administrative staff.)

The application is progressing. It is anticipated it will be complete in time for forwarding to Treasury.

Considerable time has been spent on this by the Vice-Chancellor and her staff and members of Council should be aware of the importance of the matter.

Central to the Application is the replacement of the University’s computer. The replacement envisaged: --
Secretarial Services Division
of the
Northeastern University of New South Wales
Vice-Chancellor,

I refer to your request for an interim secretary to replace Mabel for the time of convalescence following her consumption of coconut liquor.

Lorraine is a competent administrator and secretary and should serve satisfactorily for the period of Mabel’s incapacity. She will have no trouble with Mabel’s day-to-day duties, but has been instructed to give priority to the University’s Triennial Grant Application.

Also in your Application was page 54 of the Agenda of the University Council Meeting of the 15th April.

Since it was included, I assume you wish it to be considered as part of the University’s Application.

However, no costing was included for this part of the Application.

For such costing to proceed, tentative assumptions had to be made: --

The request for Mr Eaves’ sandwiches and fruit, however has caused the University’s Application to be delayed, pending further consideration.

For your information, Pink Lady is a variety of apple.

For your further information, Codling Moth is an agricultural pest, generally found parasitising apples and pears.

As the University already has a computer, this is not seen as any great disadvantage.